Bubba was the son of my paternal Uncle Elbert. He was challenged early in life being raised with four sisters. He was born in Memphis, Tennessee on September 22, 1931. He was eleven years older than me. Bubba and my oldest brother, Harold, was close in age and enjoyed their early years together. At the grand old age of twenty they set out for Chicago to make their fortune, only to return to Memphis three months later impoverished. I did get to spend a week every year with Bubba when we camped and ran trot lines at Sardis Lake in Mississippi with my dad and Uncle Elbert.

When I was quite young Bubba married Betty, a very beautiful lady, and settled down to raise a family. He worked in the offices of the Memphis Power and Light Company. At this point he became known as Johnny. His office was across the street from Sam Phillips Recording Studio, home to Sun Records. Bubba began his adventure playing guitar and early on converted to drums. During his lunch hour he visited with Sam Phillips and soon was hired as a studio musician.

Recognizing his skills on the drums, Sam used Bubba (Johnny) on many of his stars recordings on Sun Records. Among the singers was Warren Smith Smokey Joe, and most notable of them all, Elvis Presley. Some of the early Elvis Sun releases, that Bubba provided the drums on, includes MYSTERY TRAIN, I Forgot To Remember To Forget, Trying To Get To You, and When It Rains It Really Pours. It is possible the list of artists Bubba accompanied on record included Johnny Cash and Jerry Lee Lewis. They were all under contract at SUN during this period.

Following his time at SUN, Bubba formed several bands. He was well known in Memphis and the mid-South area. The last band included members Hawkshaw Hawkins and Ace Cannon. Both went on to national prominence. Sadly, Hawkshaw Hawkins' life came to a sudden end when he died in a plane crash that also took the life of Patsy Cline.

Among my memories of Bubba was August of 1981. Bubba and his band performed at my Mom and Dad's 50th wedding anniversary celebration. Another occasion that stands out is when Bubba and his ROCKETS appeared at the NCO Club on Blytheville AFB, Arkansas. MawMaw and I would dance the night away! 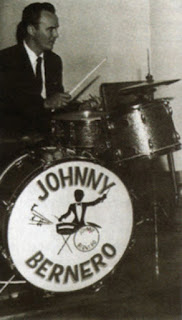