The beginning of our limb of the West Tennessee/Northwest Mississippi Bernero's tree can be blamed on Great Granddaddy Frank Bernero.

The story goes……he left his native Genoa, Italy at the ripe old age of 10 or 14 years old and paid his passage to the new world via New Orleans, Louisiana. The New Orleans Passenger Lists, 1820-1945 has F. Bernero arriving, on the ship Silenzio, from Genoa, Italy 6 Mar 1854. 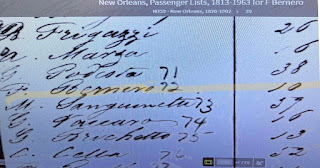 His journey led him to the port city of Louisville, Kentucky where according to the 1860 census he listed his occupation as a “Riverman”. Speculation has it on one of his many adventures on the Ohio and Mississippi rivers he landed at Memphis, Tennessee. There he met and married a Civil War heroine name Elizabeth (Eliza) Ann Trantham. They were married April 24, 186l………. 12 days after the outbreak of the Civil War.

According to a family story, a Memphis newspaper published an article about Eliza's Civil War experiences. She told of smuggling much-needed medicines, hidden in her clothes, through the Union lines around Memphis to the Confederate forces south of the city. We have not found this article, if it exist, yet.....but we are searching.

Frank and Eliza settled in Desoto County, Mississippi where they farmed and operated a family owned country store. As time went by they had 9 children. One of the boys, Tony, was my grandpa. The 1900 census lists Eliza as mother of 9 children………5 living. Frank died in 1898 and Eliza in 1929.

For the most part Frank can be proud of his descendants. Some died defending his new country, others prospered and led productive lives and one played drums for Elvis……..another story for another time!………….What a legacy!………written by: Robert L. Bernero

Note From Louise: This was one of the first ancestors I started researching. I was fascinated by the story of a young child traveling to New Orleans from Genoa, Italy in 1854. His parents were not with him. Perhaps someone on the ship was related. I am still searching for clues.