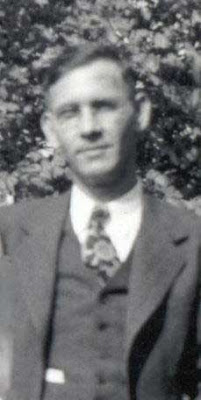 Hughey Dent Wilson
b: 17 Mar 1910 d: 25 Jun 1953
Bailey's - Paternal 2nd great-granduncle
My research on Hughey has taken a lot of twists and turns and there are still a lot of blanks to fill in. The mystery is what intrigues me and brings me back to re-examine his file, hoping a new clue will jump out and reveal the answers.

Hughey Dent Wilson and his twin brother Samuel Mallory were born on March 17, 1910, in Conecuh County, Alabama. His father, William LeGrande Wilson, was born in 1863. His mother, Lenora Elizabeth Blair, was born 07 Mar 1875.

Hughey also had one daughter with Louise Carol DeCarlo. Louise Carol was born 24 Jun 1927 and died 08 Mar 1983 in Riverside, California.

Hughey died on June 25, 1953, in Whistler, Alabama, at the age of 43. Place of burial listed on the death certificate is New Hope Cemetery, Wheelerville, AL. Several people have searched for his grave without any success.

Hughey Wilson 1930 US Federal Census
In the 1930 Federal Census Hughey is in his Aunt's household. He is listed as 20 years old, married, and nephew to the head of the household. The location of the census is Mobile, Alabama. I have not found documentation of his marriage to Lenora Lee Fields. Hughey and Lenora's marriage should be sometime in 1929. I have been searching in the Mobile and Conecuh, County, Alabama area. 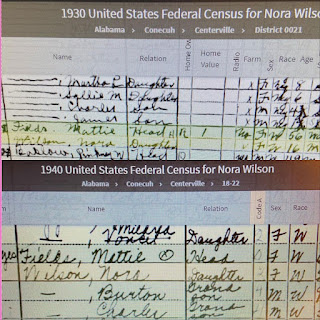 Lenora Lee (Nora) Fields Wilson: 1930 and 1940 US Federal Census
The 1930 Federal Census for Lenora Lee has her listed in the household with her mother. She is listed as Nora Wilson ,16 years old, and married. Her marriage age is listed as 15 years old. The location of the census is listed as Centerville, Conecuh, Alabama.
The 1940 US Federal Census from Centerville, Conecuh, Alabama also has Nora and three children in the household with her mother. All three children are listed as "Wilson's".  The children are Burton, Charles, and Shirley. We only knew of Burton and Charles as Hughey's children.  The third child.....Shirley..... is one year old.  Is this Hughey's child? Next question.....where was Hughey? I have not found a 1940 census for him. Strange.....I have never found Hughey and Lenora (Nora) in the same household.
I located Hughey's US World War II draft card dated 16 Oct 1940. He was in Akron, Summit, Ohio and listed his sister, Mrs. Buress May McPherson, as person who would always know his address. Buress May was living in Akron, Ohio at the time. I found her 1940 census but Hughey was not listed. We know he was in Ohio at the time so I will keep searching. Why was he in Ohio ...... Lenora (Nora) and the children were in Alabama in her mom's household?

Hughey Dent Wilson: US World War II Draft Card
Hughey and Louise Carol DeCarlo's daughter was born in Georgia.  They were together in Whistler, Al when he died in 1953.......I will keep searching.
at October 23, 2020