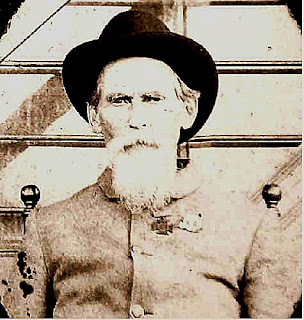 I have been fortunate to establish contact with a descendant that shares the same 2nd great-grandfather.  He passed on some information he had uncovered that helps piece this family together.  The story goes…….James Henry Dove enlisted with the Confederate 32nd Alabama Infantry Regiment April 1862 in Grove Hill, Clarke, Alabama. Before leaving he moved his wife, Nancy McDonald Dove and children, to New Orleans, LA. He thought they would be safer there .He returned to find his wife had died of  yellow fever. The children, William J., Mary Jane, Julian Ellen, and John Wesley, had been placed in a Catholic Orphanage in New Orleans, LA. It was believed his daughter, Mary Jane, had remained in the Orphanage and became a Nun.

I was so fascinated with this story I immediately pointed my research in the direction of finding Mary Jane Dove. I am not sure when her mother died.  She was only about 10 years old when her father left so she could not have been much older when she was placed in the orphanage.

I first found her in the 1880 census in New Orleans listed as Sr.(sister) Mary Dove.  The last page of the census listed the name of the orphanage as St. Joseph’s German Orphan Asylum and the street was Laurel St. in the Orleans Parish.  I was so excited to now have a name of the facility.  My next search was to find out where she was in 1870.  I searched the Orleans Parish enumeration districts line by line and……bingo…..I found her.  The information is not completely accurate because her birth place is listed as Texas ……but ….I know it is her.  I also found her sister,  Ellen Dove, listed in this same facility……….another tiny piece of the puzzle!

I’ve researched St. Joseph’s German Orphan Asylum and found that it was run by the Sister’s of Notre Dame. I was able to make contact with one of the sisters in charge of the archives……….hopefully we can find out when she became a nun, when she died, and where she is buried.