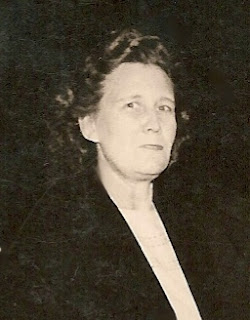 Ruth Mae Canady was born on June 24, 1909, in La Grange, Tennessee. Her father was Charles Alfred Canady and her mother was Martha Alma Watkins.

The following is a photo of Ruth as a little girl with her sister, mother, and grandmother. Her mother, Martha Alma, passed away in 1922 from tuberculosis. Ruth was 13 years old. 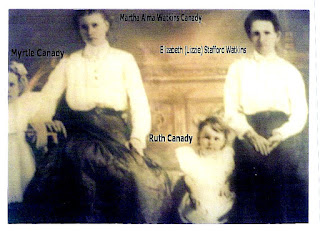 L-R: Myrtle Canady, Martha Alma Watkins Canady,
Ruth Canady, Elizabeth Stafford Watkins
Ruth was 18 years old, living in Tennessee, when the great Mississippi River flooded and forced hundreds of thousands to flee. When the 1930 census was taken, she was listed as a boarder in a private household in Memphis, Shelby, TN. She was 21 years old and listed as the housekeeper. I remember Ruth telling me that she left home and went to Memphis where she worked for a family and lived in their home. The census was taken in April before she married Boyd. 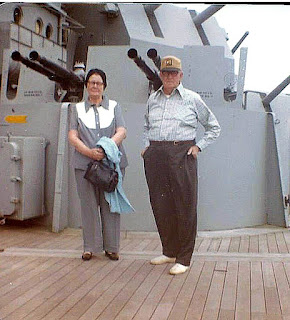 Ruth and Boyd Bernero: About April, 1974
Aboard the USS Alabama in Mobile, Alabama
Ruth married Boyd Eugene Bernero on July 18, 1930 in Crittenden, Arkansas. They lived in Memphis, TN and raised five children.  Bailey's Paw Paw, Robert, is the baby of the family.
Ruth And Two Of Her Sisters-In-Law 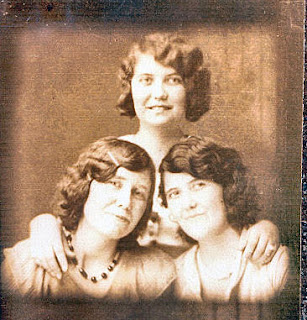 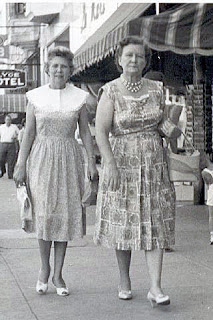 L to R: Gertrude and Ruth - Downtown Memphis
Robert remembers she would always take the city bus, once a week, for downtown Memphis. Usually she would go with one of her sisters-in-law.  They would make a day of it, shopping and paying bills. 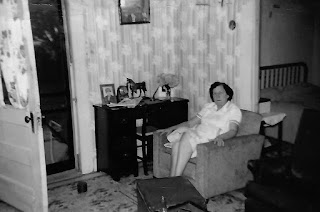 About 1955 Ruth went to work part-time, in the snack bar, at the Bellevue drive-in theater. The theater was within walking distance and she was thrilled the day she was hired. Her love of people made this a prefect job for her.

She often told the story of one night in particular. The movie was in full swing and the snack bar was full of customers. A young handsome man entered the snack bar. He bought a candy bar and was visiting with Ruth and her co-workers, as he unwrapped it, and began eating his purchase. Out of no where the snack bar began filling up with young girls not buying anything. The young man threw the candy wrapper on the floor and a mad rush ensued to retrieve the wrapper. One of the girls sustained a injury when her head came in contact with a pole as she was diving for the wrapper. The young man picked her up and kissed her forehead........ELVIS PRESLEY......... was in the building. 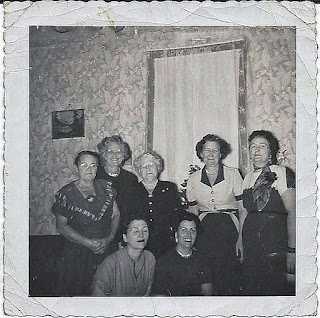 Ruth-back row-2nd from Right
Monthly Bunco Club
Ruth's Bunco club would meet once a month. Members would take turns hosting, providing snacks, and refreshments. Standing next to Ruth on the end is Ruth's sister-in-law, Dorothy Sailor Bernero.
Ruth died on September 5, 2000, at the age of 91 , and was buried in Virginia Beach, VA.
at November 19, 2020